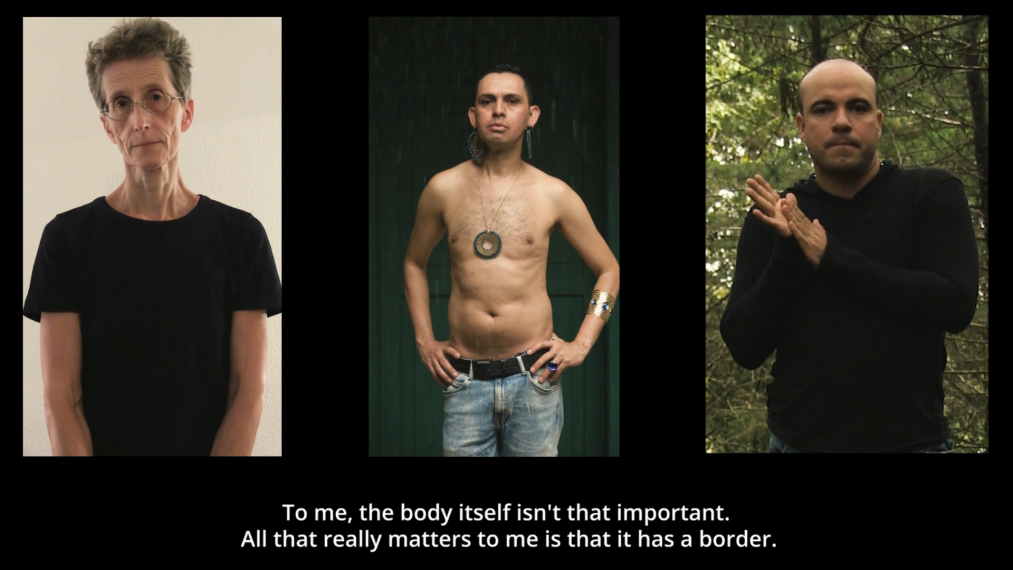 three-channel video installation (online version), 13:25 min, part of the project own own body own

“What is ‚Body Ownership‘ to you? Do you have a body? Are you a body? Do you make your body?”, we asked three interview partners: Jorge Giraldo, a former sergeant in the Colombian conflict and a filmmaker, Lilith Border, a trans* activist and folklore dancer in Medellín, and Gwen Schulz in Hamburg, an anti-stigma educator and mental health worker drawing from her own experiences in psychiatric institutions. We arranged their answers to the video VOICES. It is a polyphonic narration on losing and regaining ownership over the body one calls „one’s own“. Their words give shape to the relationships between societal gaze and body configuration. While listening to their voices, Jorge, Lilith and Gwen stand silently in front of the camera, open to meet the gaze of the viewer.

Kirstin Burckhardt is a visual artist combining video, drawing and performance with sound and spoken word. Critically drawing upon her training in psychotherapy and neuroscience, her practice addresses body as an interpersonal fact and friction, continuously rubbing against the questions: »Do you have a body? Are you a body? Are you making your body?«. Continuously questioning what defines a body, her artistic research focuses on interpersonal space as a locus of sensitivity that surpasses the body-mind duality in favor of empathy, transgenerational trauma, and the power of imagination. Kirstin Burckhardt studied fine arts in Hamburg (Germany), Lyon (France) and Hangzhou (China). Simultaneously, she obtained her Master’s degree in psychology at the University of Hamburg and is currently in training to become a licensed clinical therapist. Her work has been exhibited internationally in solo and group exhibitions at KINDL Berlin-Centre for Contemporary Art (Berlin, G), KAI10|Arthena Foundation (Düsseldorf), Deichtorhallen/Sammlung Falckenberg(Hamburg), Festival of Future Nows 2017->∞ at Hamburger Bahnhof (Berlin). Exploratorio in Medellín (Medellín, COL) and the Goethe Institut Sofia (BUL). She has collaborated closely with performing and visual artists from China, Sweden, and Colombia and has received working grants by the ifa (Institut für Auslandsbeziehungen), the Goethe Institute Bogotá, and the city of Hamburg’s ‘Elbkulturfonds’ and ‘Arbeitsstipendium’ (working grant).
http://k-burckhardt.de
@kirstinburckhardt
0 Facebook Twitter